I am up at 4am. I have actually been up since the roosters started crowing at 3am but who’s really counting.

Visiting Tikal, one of the most important Mayan sites, has been something I have wanted to do for quite a while. The Mayans intrigue me. They seem to have had a deep understanding of nature, the cosmos, and time- yet our mainstream knowledge is only of their calendar, their supposed prediction of the end of time, and their human sacrifices. What a shame that we limit our general “knowledge” of this ancient civilization to just a few topics- mainly because they are easy to dramatize in film, literature, and in our own minds. Once we decided to begin our adventure in Guatemala, I knew there was no way I was going to miss it. Aaron has also been studying the Mayans for some time now and Tikal was high on his list as well. Add a 13 year old girl who gobbles up anything ancient or “weird” to the mix and you have three very excited people, up at 4am, ready to head out to see this ancient Mayan city in the jungle.

We were all very excited to see Tikal, up close and personal.

We booked our Tikal experience through our hostel, Chal Tun Ha, in Flores, which is about an hour from Tikal. Neil, the owner, made all of the arrangements for our transport, tour, lunch, and tickets. Pretty much every hotel in Flores can do this for you or point you to someone within 3 feet of where you stand who can. We opted to include the guided tour since we wanted to really learn some new information about Tikal. Total cost: $40US/person.

Carving in stone at Tikal.

Tikal is impressive. Built by the Mayans, an ancient civilization we still admittedly know very little about, it is a main attraction for anyone visiting Guatemala. Only a fraction of this ancient place has been unearthed but what has been uncovered stands high above the jungle canopy, emphasizing the grand city it must have once been. Several of the pyramids can be climbed but if you choose only one, let it be temple IV. This pyramid brings you to such a height that you can see the tops of temples I, II, and III above the canopy. One of the things that makes Tikal so different from other Mayan sites is that it is still buried deep in the Guatemalan jungle. Your drive for miles into the jungle just to get to the entrance. Once inside, you can still see lonely mounds of earth that are just screaming that they are hiding even more pieces of Tikal inside. It really is a place that could capture almost anyone’s imagination. 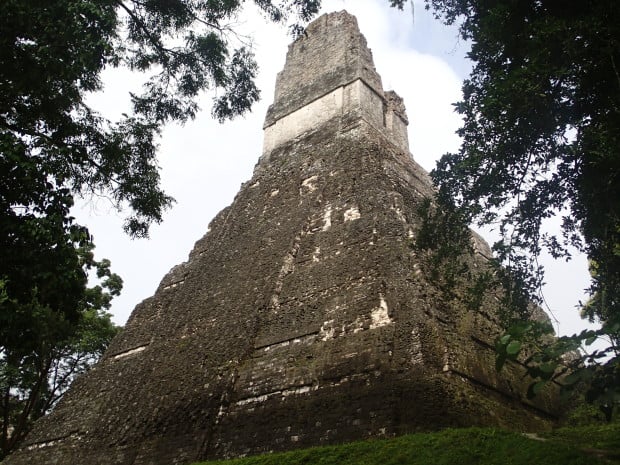 Tikal Temple I, as seen through the trees.

Unfortunately, our tour guide was not the guide for us. He was quite good at conveying the basic history of Tikal. Sadly, he was also quite good at pushing the pervasive understanding of the Mayans- they sacrificed people, they were “primitive”, and they did not have the knowledge that we have today. He even told our group that the Mayans “accidentally” built Tikal in such a way that sound carries very well, thereby making it easier to communicate across certain areas of their vast city because the Mayans were not capable of planning such a thing. It seems highly unlikely that this incredibly helpful feature of their city was an “accident” in any sense of the word. In fact, the phenomenon reminded me of a fort I visited years back in Hyderabad, India where sound carried in a similar fashion. Historians are quite certain that the builders of that fort did not accomplish this by “accident”.

Part of the main acropolis at Tikal. Notice the film makers on the higher level.

Having such a guide somewhat ruined the experience for us. Neither Aaron nor I are particularly interested in the popular understanding of human development- namely that humans basically progressed in one linear climb up to where we are today. It seems unlikely to us that ancient people- those who gave us sites like the great pyramids, accurate descriptions of the cosmos, and deep understandings of the interconnectedness of all things on this planet and beyond- were “primitive” as we define it today. It was harder for us to really dig in to the history all around us at Tikal when we had a guide who was not interested in debunking any of the popular and mistaken beliefs about the Mayans or in discussing any possibilities that lie “outside of the box”. Even Victoria, our 13 year old travel companion, picked up on the fact that our guide was basically telling her things she learned in school or in a book.

Sitting atop Temple IV will allow you to see one of the most amazing sights at Tikal.

It’s unfortunate that we did not have the experience we were hoping for at Tikal but I am still glad that we went. Just seeing Tikal in person was worth it. The reminder not to believe everything we are taught about history, no matter who the teacher is, was a good one too. I do hope that the Guatemalan government, historians, and people in general start taking a look at the popular beliefs we hold about the Mayans (and other ancient civilizations) and start asking if those beliefs are accurate or if they just might be based on our own biases about those who came before us. 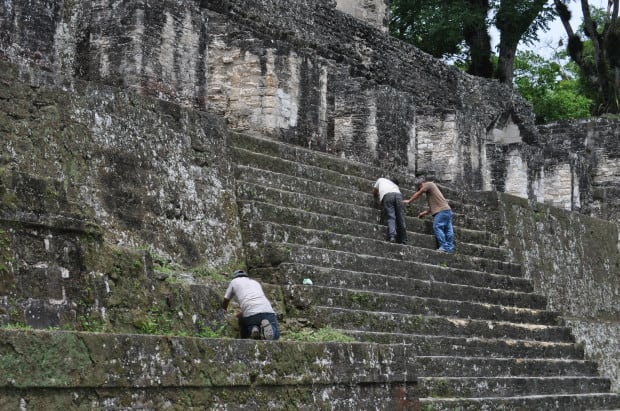 The real work of uncovering Tikal continues everyday. While archaeologists continue to dig, men comb the structures daily, pulling off growth and weeds to keep what has already been uncovered, visible.

Have you been to Tikal? What was your experience?