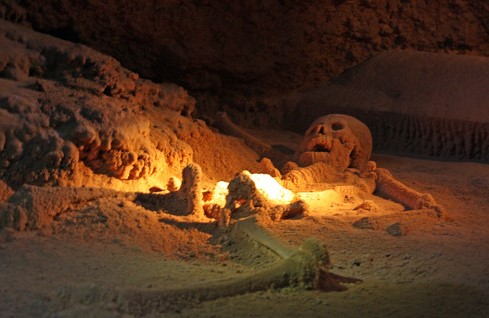 “We are all connected even though we cannot see one another. We cannot see what comes ahead, we can only try to work together to get to where we are going.”

Our small group of five is standing in a cave, waist deep in water, in complete and utter darkness as our guide speaks.

“It does not matter if your eyes are open or closed right now. You must trust that the person you are connected to is connected to the next person and so on. Walk slowly. Accept this. In this way you will get to where we are going without any difficulty. This is how my ancestors, my people, walked through life. Connected.”

The Mayans are an ancient civilization we truly know very little about. Many ancient texts that might have given us more information and insight into their civilization were destroyed centuries ago by conquistadors- only a few remain. Cities have been unearthed in Guatemala, Belize, and Mexico that suggest they had a large, thriving civilization. Then, at some point, they seem to have “disappeared” and their cities and monuments were swallowed by the jungles and natural world of the area. Of course, this is not entirely true since there are still a number of Mayans living in the same general areas. Hypotheses on where the Mayans went are numerous. Currently, the most popular theory seems to be that they suffered a severe draught and could no longer feed all of their people. Other theories include invasion, genocide by an outside source, a devastating natural disaster, or an elite religious class that became to powerful and caused fighting and, ultimately, the collapse of the Mayan civilization. Some even believe, based on the Mayans advanced knowledge of the cosmos and their intricate methods for tracking time, that they may have been connected in some way with extraterrestrial beings before their decline.

Whatever the reason for the Mayan’s decline, most people agree that caves were symbolic sites for Mayans where they could go to connect with their Gods and give thanks or ask for help. Actun Tunichil Muknal (“ATM” for short) in Belize is a 3 1/2 mile long cave that would have been one of the portals to what lies beyond this world for the Mayans. It would have been used as the Mayans faced whatever it was that ultimately caused them to abandon their cities. When ATM cave was discovered, pottery used in ceremonies and the bones of sacrificial victims were found, untouched. Only 28 guides in the entire country of Belize are licensed to take groups into the cave. They are limited to having only 8 people in their tour groups at a time. The guides would like to make that number even smaller. There are no cameras allowed.

We were beyond fortunate to have a man named Martin as our tour guide for our journey into this sacred Mayan cave. Martin was the best tour guide any of us has ever had on any tour- ever. His passion and knowledge about the Mayans and the natural world around us was astonishing.

For example, did you know:

* There is a plant called the Guardian of the Jungle in Belize that acts as an antibiotic for most infections.

* The plant called chaya that is widely eaten in Belize was domesticated by the Mayans. Wild chaya has thorns, domesticated chaya does not.

* An ear of wild corn used to be only a few inches big. The Mayans domesticated that as well and systematically chose the largest seeds to dry and plant in order to get a size of corn that was more beneficial to them.

* Corn was not originally solely yellow. We created that. Corn during the Mayan age would have been several different colors. In the US we call a similar corn “Indian corn” and for some odd reason we believe it is only for decoration and that we cannot eat it.

* Green iguanas in Belize must bury their eggs below the earth where they can find a temperature of about 91.5 degrees fahrenheit. They do this instinctually to perpetuate their species because if it is too hot or too cold, only one gender will be born. Their eggs are leathery and not at all like chicken eggs.

* When you rub clay rocks together with a bit of water you can create a thick, reddish paint.

* There are numerous types of orchids that only grow in the canopy of the jungle, making them impossible to see to the average jungle walker.

* There is a lizard know in Belize as the Jesus Lizard because it can run on top of water.

Martin’s knowledge and passion were even more evident (and even more appreciated) once we entered ATM cave. He is able to create an atmosphere that really allows you to see what the Mayans saw in this cave and others like it. It is truly a spiritual place and Martin treats it as nothing less.

To enter the cave, you must swim. To enter some of the chambers of the cave where the Mayans performed their ceremonies is a bit more challenging. You must climb over rock, pass through impossibly small spaces, swim some more, and scale walls of the cave- all with only the light of your headlamp. Once in the chambers, you are no more than a few inches from pottery and skeletons left by the Mayans. Those that are left are still in the exact positions they were found in. Huge pieces of pottery sit propped perfectly on small pieces of rock; smaller pieces sit in pieces after being ceremoniously broken to allow the harnessed energy within to escape back into the universe; skulls and bones lie in a pit where they were placed; a skeleton- the Crystal Maiden- lies exactly as she was left after being sacrificed to the Gods. It is the most intimate experience I have ever had with history. I kept wondering how the Mayans would have down this with only torches as their light source. How difficult it must have been to carry large pieces of pottery and other ceremonial pieces into the cave for ceremonies. How dedicated they must have been to venture into this cave for the first time.

When you try to look at the cave through their eyes, though, their attraction and dedication to this place makes more sense. A little ways into the cave, just beyond the main entrance, is a point at which light and dark meet. There is a break in the cave above that provides light, that is the world above where they came from. Beyond that point, there is only darkness and the unknown- the future. Symbolically speaking, this spot is where the past and the future meet to create what is the present. The cave provides other spiritual wonders if you are looking. Hollow stalactites and stalagmites make music when plucked lightly by human hand or falling water; grand formations take the shape of Mayan Gods in their shadow form when light is shined upon them; there is a “ballroom” of smooth rock that houses a single stalagmite in the center of the ceiling and an unimaginable number of artistic formations along the right wall- formations that include what looks like a group of Mayans performing a ceremony, and a standing mask.

Adding to the experience, Martin made sure to point out inconsistencies he felt existed between what archaeologists say and what he observes as an intelligent, knowledgable human being. For example, in one chamber lies a vessel with two figures on it. Archaeologists have dubbed it the “monkey pot” because they believe the figures to be monkeys. Martin pointed out that there is plenty of other Mayan art that depicts monkeys, complete with tails. The markings on the cave pot have no tails. He believes them to be a representation of twins depicted in Mayan lore. In another place lies a pit filled with bones. Archaeologists have decided that those bones were washed into that spot by flowing water from a small ledge above. Martin pointed out that if that were true, the skulls, which are the easiest to float, would have washed much further away. The two bones that lie just outside the pit include a femur, a heavy bone, and should have been deposited within the pit by water, not outside. The path of the water that used to flow in this chamber is also evident in the rock if one looks carefully. He believes the bones were dismembered and placed where they are for a specific reason.

I have no real words to describe how we felt about our experience at ATM cave. Nothing I describe can do it justice. I wish I could say that I wish I had pictures, but I don’t. Experiencing ATM without a lens to look through was a rare treat for me. I could really focus on the experience.

This is what history is. Not what you sit in a class and memorize out of a textbook in high school. We were able to see and feel what the Mayans did. We had a guide who allowed us to ask questions and use our own senses to feel out what may have been happening during the time that ATM cave was most used. And, perhaps most importantly, we were given a complex view of the history we were looking at. There were no “good guys” and “bad guys” or sweeping generalities on this tour- just ancient people doing the best with what they had, just like all people throughout time. This allowed all of us to really make connections between ancient and modern people. Since Aaron and I believe that all people are connected, this was very meaningful for us.

If you ever get the chance to do only one thing in Belize, let it be a tour through Actun Tunichil Muknal. Just make sure you find Martin to be your guide!

Note: Martin most frequently works as a guide for the company MayaWalk in San Ignacio. However, he also does freelance tours and cooperates with other companies when he can. Ask around, there are only 28 guides in all of Belize who do this tour- it’s likely that only one is named Martin.

A Vegetarian in Central America