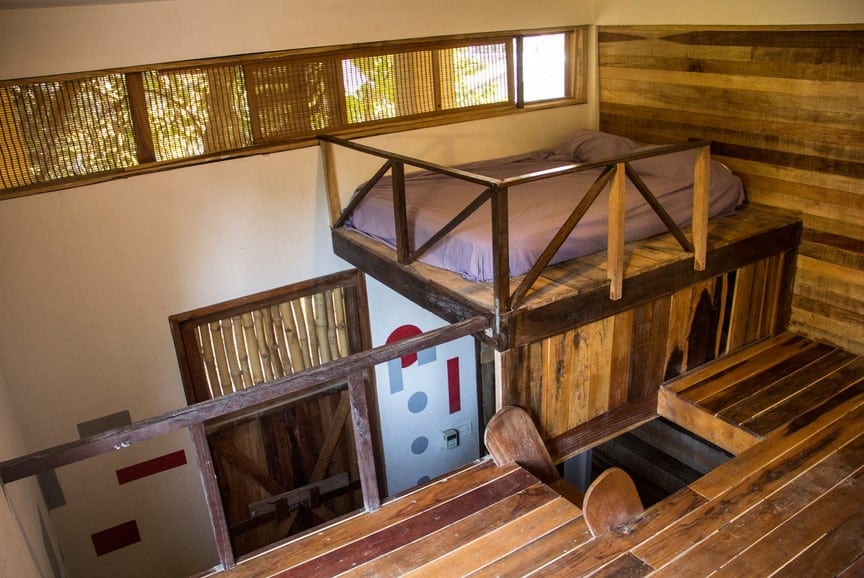 Caye Caulker, Belize is full from end to end with hotels and hostels. There is sure to be something to suit anyone’s criteria. We do our best to travel cheaply and so we tend to stay in hostels. Cheap hotels make the cut sometimes too.

Because we decided to come to Caye Caulker at the very last minute, we ended up having to accommodation jump every few days because most everything was booked for at least part of our trip. For us, this is no problem since it gives us the chance to see a few different options in one area. Here are the places we stayed.

We originally called Yuma’s Hostel, a very popular spot on the island. They were booked clear into the next week and suggested we try Bella’s.

Bella’s had space and when we arrived up they showed us a simple and stuffy but doable cabin that could accommodate 3 people for $30US/night. It seemed a bit steep but we knew Belize was somewhat expensive and the room seemed perfectly fine so we took it. They asked for one night’s payment up front but we gave them four since we had no desire to go anywhere else. Mistake.

Unfortunately, when we returned from dinner in the evening we noticed red ants crawling everywhere right near our room. Not their fault but since I once had an extremely bad reaction to a red ant bite in Egypt, we decided to stay the night but move on the next day. We then found out the water was not working. The owner did not know when he would have it fixed because he was busy partying with some of his other guests. We were moving on the next day anyway so no big deal really.

The next day, the owner refused to get up to talk to us (at 9am) because he was hung over. When he finally did, he called my allergy “ridiculous” and was altogether unhelpful. He did finally agree to refund us for the nights we would not be staying since he had only asked for one night’s payment anyway. He told us to come back later- he needed to sleep.

Aaron returned later and, after the owner tried to again argue his way out of refunding our money, was given only a portion of the refund promised and the owner told him to leave. We decided to just let it go since it was our mistake to pay for additional nights upfront anyway.

The facilities at Bella’s are basic but doable. It’s a colorful hostel with people playing music in the evening and friends grilling up fish they caught during the day for dinner. The people staying there were friendly and pleasant. Its not far from the beach at all and the management has some bikes and kayaks you can take out for free. Marijuana is present on the scene but honestly, you will be hard pressed to find anywhere in Caye Caulker where at least casual use is not the norm. Under different circumstances we probably would have been just fine there. Sadly, the owner’s attitude was enough to lead us to suggest that you avoid this hostel if you can. The possibility of no running water for an undetermined amount of time is probably enough to deter most travelers anyway.

We highly recommend Sandy Lane. This place is a hidden gem on Caye Caulker and you will be hard pressed to find such a great place for the money- you may not even find a nicer place for more money. When we left Bella’s we headed over to Sandy Lane and were incredibly pleased with our stay there. It is a small place with no sign identifying it from the outside. You can ask a local for directions or look for the small waffle house and turn right to find Sandy Lane. It is also right across from the soccer field on the side farthest from the split (the popular swimming location).

Sandy Lane is run by Rico and Elma. There are an older couple who run a clean, quiet establishment. There are several individual little cabins and one larger building that houses the “dorm”. However, this dorm is not like any other one I have stayed in. There are separate rooms with two beds each. Each room has it’s own sink. The shared bathroom and showers are downstairs in the middle of the complex. Everything is simple but immaculate. Towels and soap are provided. The cost of our room for three people- $25bz ($12.50US)/night. Private cabanas run about $50bz ($25US).

Sandy Lane is a little further from the beach and the split but not by much. It is also very close to two cheap places to eat. On the corner of the main street is the small waffle house mentioned above that sells individual waffles for $3bz ($1.50US). One waffle for each of us was plenty. If you go behind Sandy Lane and turn left, on the very next corner is a very small place that we think might be called Fry Jack’s. It’s hard to tell because that is also the name of most of what they sell. You will recognize it by the list of options painted on the side of their little, white building. They serve stuffed fried jacks- basically fried dough stuffed with your choice of ingredients- and a lunch special everyday. The fry jacks are big, delicious and cost between $1.50 & $4.00bz.

Sandy Lane only had room for us for two nights so next we headed to Morgan’s Inn, an adequate choice on the island. We found it by walking around the island and inquiring about rooms and rates until we found a place we liked. If you walk down the main strip until you can’t go straight anymore and the road curves to the right, you will see Morgan’s on your left. It is not an Inn exactly, but a small group of cabins for rent.

Gregory, the owner’s stepson, happened to be sitting on their porch when we walked up. He showed us a cabin with two big beds, a kitchen, bathroom, and back porch for $30US/ night. We took it pretty quickly.

All of the cabins at Morgan’s have a kitchen, meaning you can cook your food rather than eating out all the time. The fans provided are strong and the back porch on each cabin catches a nice breeze from the ocean, which is right in your backyard. There is dock you can swim off of but you should swim in the white sand areas and avoid the areas of water with grass because they have had people get cut on shells, rocks, and washed up glass that gets caught in the grass. Towels, basic kitchen essentials, and soap are provided.

The owner, Ellen, lives across the street and is less than organized. You will have to check in with her at some point if you stay here and you will see what I mean. She is nice enough though and is happy to take you on a bird hunt if you ask. Gregory does most of the care taking. He does partake in what seems to be Caye Caullker’s past time, smoking marijuana. Anyone who is uncomfortable around drugs may want to avoid Morgan’s as he is even less discreet than most others on the island. Morgan’s isn’t for everyone but we did not have any trouble here and were quite comfortable.

On the main road between the Morgan’s Inn and the turn off for Sandy Lane, is a hot pink fruit stand that makes, bottles, and refrigerates fresh fruit juice. For $5bz you can buy a tall bottle of ice cold pineapple, watermelon, guava, melon, lime, orange, starfruit, or mixed juice. New flavors seemed to appear everyday! It’s our favorite treat on the island.

There really are TONS of places to stay on Caye Caulker and this is just a small sampling. If you can stand basic accommodations and do not need air conditioning, you can stay here fairly cheaply. Anything above basic will cost you but will still probably not break the bank.

We know this is only a small sampling. Have you been to Caye Caulker? Do you have any suggestions for accommodations to add? 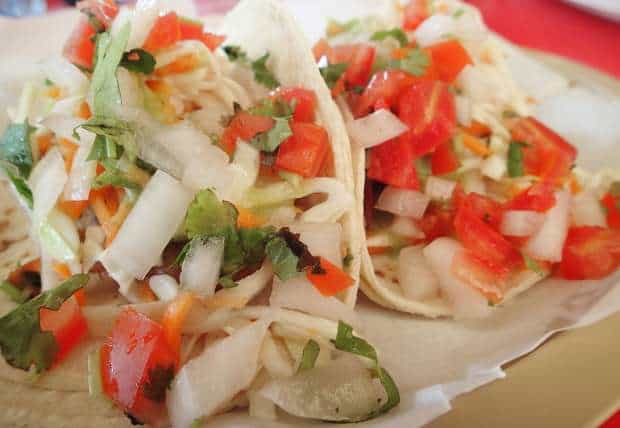 A Vegetarian in Central America

10 Tips for Traveling on the Cheap- How We Do It