Ghandi is famously quoted as saying “be the change you wish to see in the world”. In fact, this bumper sticker quote was probably extracted from the following verifiable quote from Ghandi…

“If we could change ourselves, the tendencies in the world would also change. As a man changes his own nature, so does the attitude of the world change towards him. … We need not wait to see what others do.”

Ghandi was intensely aware that personal transformation and social change go hand in hand. Nothing grand can change without a great force of voices in unison behind it. Likewise, you can’t get a force of voices to speak up in unison if individuals do not strive for change within themselves. It is necessary to focus on what is right in front of us as the beginning of the greater work.

But how does one stay motivated to “be that change” when the individual work being done seems like it is only a drop in the bucket?

After seeking out a volunteer assignment  at La Tortuga Verde, we have been combing the beach for an hour or two a day, picking up trash as one of our tasks. The beach in El Cuco is, sadly, not the filthiest beach I have seen, but it does have it’s fair share of consumerist junk that shouldn’t be laying around the beach. Potato chip bags, plastic bottles, plastic bags, bottle caps… It really gives one pause to see just how much junk we humans produce and make waste of.

Garbage on the beach, like so many other negative things, has a way of seemingly multiplying once you set your focus on it. You go out looking for a few plastic bottles to pick up and you see a piece of paper…. and a plastic bag… and another… and some plastic cups… and some styrofome…. and a shoe… and a cigarette pack… and another….

Suddenly the whole beach seems completely littered with human produced waste. The same beach that seemed like an idyllic, isolated paradise to relax on just one hour ago now looks like a stretch of land in need of some serious eco-friendly attention.

So, we walk the beach and throw what we can into a bag until the bag becomes heavy and we have to head back for the day. It gets heavy pretty fast.

For an hour or so a day we stroll the beach and pick up whatever trash we can fit in our bag.

In reality, it is not just the weight of the bag that is heavy; the weight of what we humans have created on beaches all over the world is pretty heavy too. Humans do great things, but they also do pretty awful things. Throwing garbage on the ground as if the entire world is our personal dumpster, is pretty awful. You don’t have to be a “bleeding-heart” environmentalist to believe that we can do better than this.

So, if it’s a losing battle, why do we pick it up? Why does Tom, the owner of La Tortuga Verde, care if anyone picks it up? Because… well… why not? If we see something right in front of us that we believe is not working, that we believe we have made a mess of, shouldn’t we just…. pick it up? Why wait for other people to do it? Why wait until everyone “gets” it? That might be an awfully long wait.

The funny thing about everyone “getting it”, is that someone- or a few someones- have to “get it” first. Someone has to get the ball rolling and just….pick it up. If we are really being honest, the garbage on this beach will continue to re-appear until there is a massive shift in the awareness of the local population. That is a long way off…. but individual work can still be done. 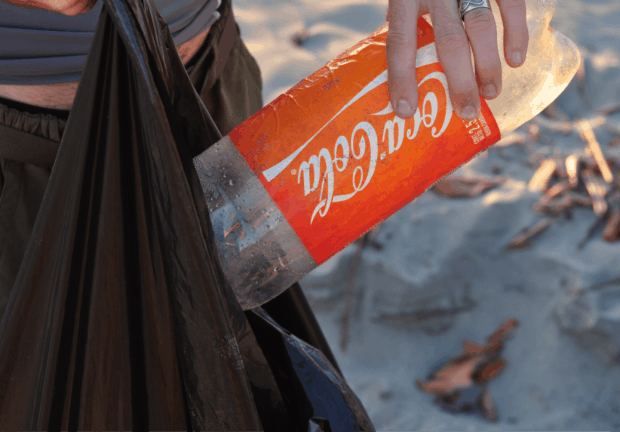 Plastic bottles are one of the things we find most often on the beach.

Our individual ways of “being the change” might change with the days. Some days our ways our ways may be simple and some days our ways may be more grand. Maybe, for most of us, this is the way it’s supposed to be. Focusing on one thing at a time is far more easily done than exhausting ourselves trying to “fix” everything at once. Start with what is in front of you. Stop waiting for the next guy. Lend your voice to the greater movement when the opportunity arises.

Motivation ultimately comes from within. The big picture is important, but allowing it to overwhelm us into inaction doesn’t do anyone any good. Likewise, debate and discussion about the world’s ills are valuable and have their place but actually doing something, no matter how small, no matter how lonely (for now) is better. The individual “doing” feeds into a larger web of intention and positive action that can ultimately create a mass force towards change. For me, there is no greater personal motivation.

What can you do today to move us all a little closer to the change you wish to see?